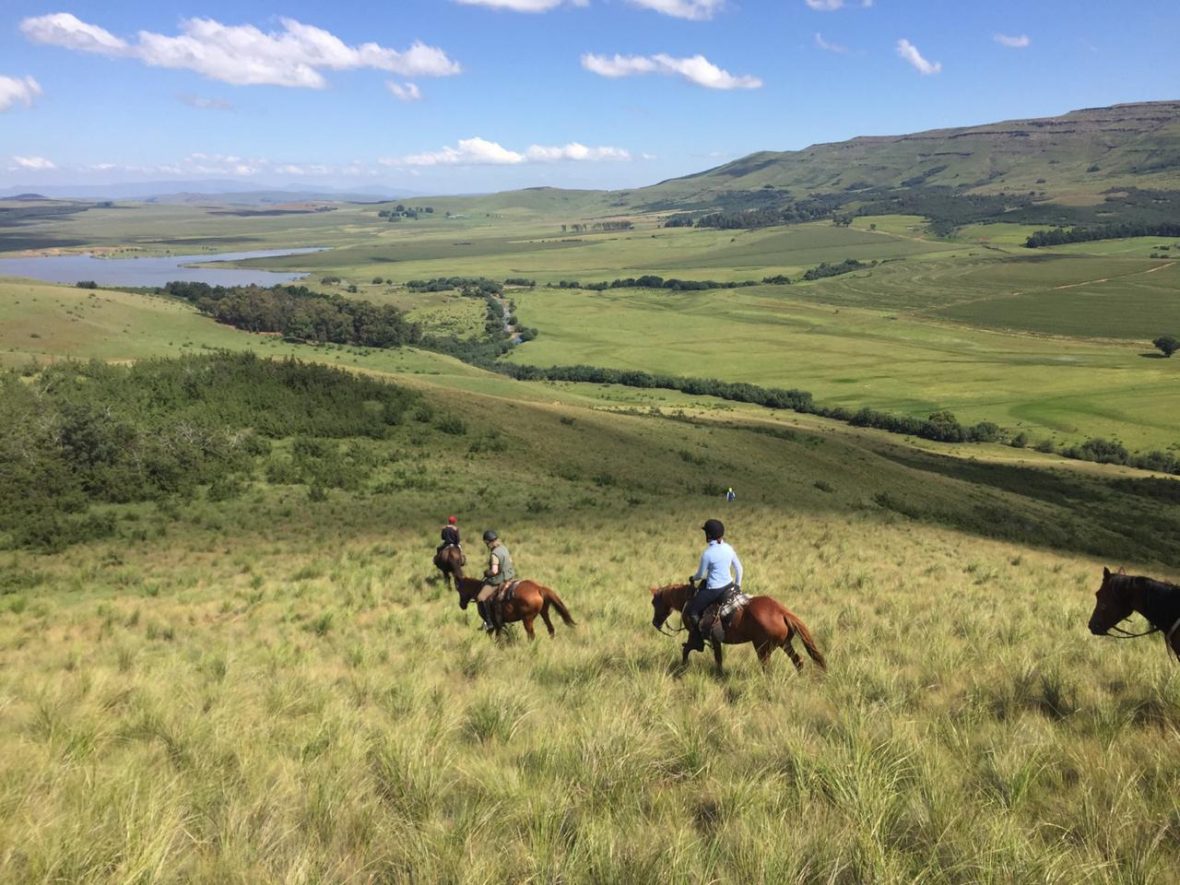 I have to say Lesotho was hardly on my radar at all and certainly not as a place to go riding. Ignorance maybe bliss but you are missing out big time if you stay ignorant of this one.

End of February 2019 I flew to Durban and was picked up by the colourful Steve the owner of Khotso, the farm and enterprise in South Africa that run rides and other activities into Lesotho.

The farm, about 3 hours from Durban, sits at an end of a dirt track. There’s the main building, Steve’s original house, with a few guest rooms, dining area, sitting area, honesty bar and kitchen. Other guest rooms are in rondavels about 5-10 minutes walk away but someone kindly comes along and picks you up for the meals if don’t want to walk it. My room, in the main building was light, airy, very comfortable and had en suite.

Steve introduced me to Alexis his manager who has been coming to Lesotho for 11 years but worked as manager for the past 4. We were to find out that his organisational skills, attention to detail and cooking abilities were exceptional, not to mention his good humour, as he transported our luggage on the ride, helped by Jason.

All the other 7 riders had arrived earlier and been on a short ride and some for a walk and swim in the river. Pre dinner drinks at 6.30, G&T, wine, beer, Steve and his wife Lulu came and talked to us all. Dinner was steaks and very good sausages, cooked on a BBQ, tomato and green bean salad and another salad of lentils cauliflower and beetroot, plus drinks of your choice.

Next morning the horses had been transported to the Lesotho passport border control. We had an early breakfast, all you could wish for and more, cereal, yoghurt, juices, fruit, toast, scrambled eggs, bacon tea and coffee and then were driven off by minibus to the horses, already tacked up. Leather saddle bags were provided as was brand new rain gear and water bottles, 2 each.

The ride is made up of a day getting to accommodation, spending 2 nights there, so the next day is a circular ride around the area, and then moving on. So today we had to get to The Lodge a collection of rondavels built by Steve at the end of one of the more remote villages. This involved a 1000m climb up and over a pass and down again.

Here I have to say something about the Basuto pony. Small 14-15h, fairly narrow, barefoot with unbelievably tough feet. Lesotho is hilly, the majority of the time you go up or down so these ponies are born to it and they are climbers par excellence. Rocky ground is absolutely no problem to them, rivers they literally nose their way through, you have to trust them completely and hold the rein by the buckle and let them get on with it. Occasionally we did have to get off, you can either lead your horse or let it loose, this only happened when it was really rough ground, big boulders, narrow openings where the horses would have to pivot and change direction on a rock, climb up a big ledge or very very steep grass.

Lunch about half way up, sandwiches looking down the valley we had come up, not an iota of human presence except us, an awareness of immense space, sky and landscape. Up over the pass, some areas here where we could canter and some of these ponies have a fair turn of speed. Eventually into the village, random rondavels spread out until we came to our group, The Lodge. We could untack the horses, lightweight endurance saddles under which, along with the numnah is always a Lesotho blanket, breast bands and snaffle bridles.

One of the rondavels had 2 showers and toilets, with hot water, miraculous as there was no electricity otherwise (own small generator purely for the showers). The rest had bunk beds, not a huge amount of space but clean and cosy, and there was another building with wood burning stove (wood brought in from South Africa), a table and cooking area and no lights. Snacks, biltong washed down with tea, coffee or beer. We sat outside beside a fire with the horses all around and as it got dark the stars were phenomenal. Dinner back indoors was huge portions of Spag Bol, washed down with fabulous wine. 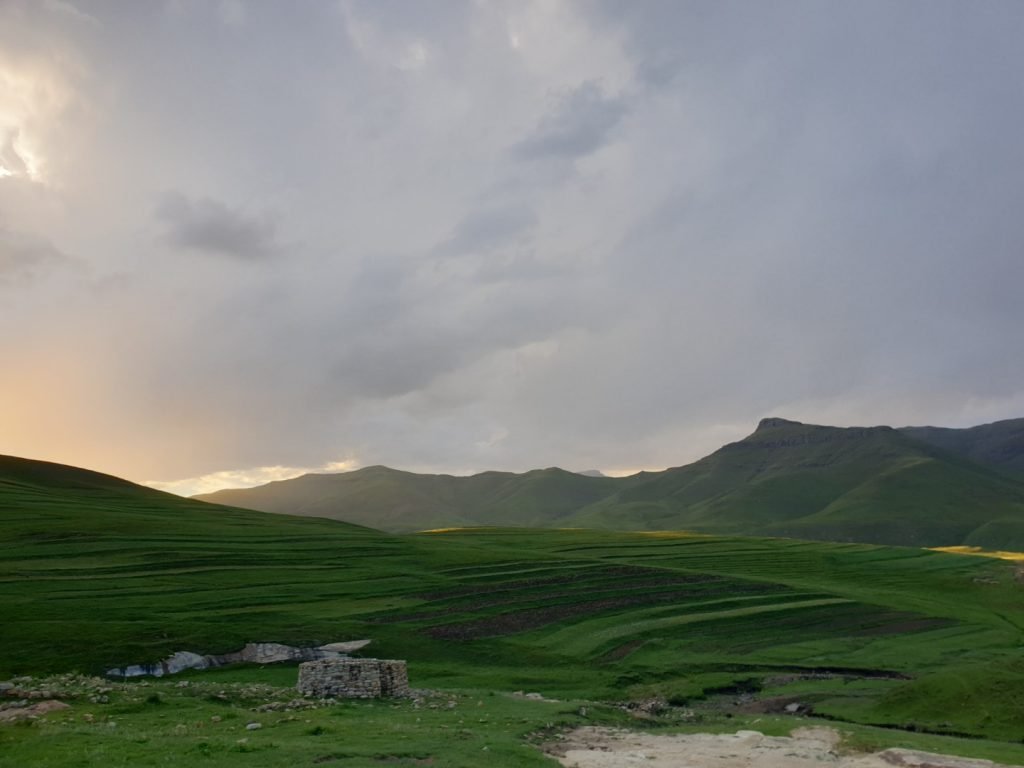 Next day was a round trip, sometimes coming across herds of cattle attended by a lone man or sometimes a few boys, contouring around the hills, through another village where 4 oxen were dragging a sledge loaded with wood uphill, cantering when we could, usually anywhere where there was a slight uphill of open ground, where we could spread out and let the horses find their own rhythm and pace. Again a few areas where we had to walk, one to get down into a gorge, where we followed the river through fantastic rock shapes. We stopped at a small area of grass with ancient rock paintings on the rock face, there was a river which seemed good for a swim, which 2 of us did pre for lunch, it really was the perfect spot. Then a relaxed ride back with a ‘ye ha’ gallop up the hill to the Lodge. When we got back, some of us went accompanied by Charles to visit one of the villagers’ homes, and onto another which had a white flag outside, depicting the local alcohol. I missed this one wanting some space to myself, but regret it a bit. Another ample meal of roast pork, peas mashed potatoes with herbs, roast squash beetroot and garlic. We were not going to starve! 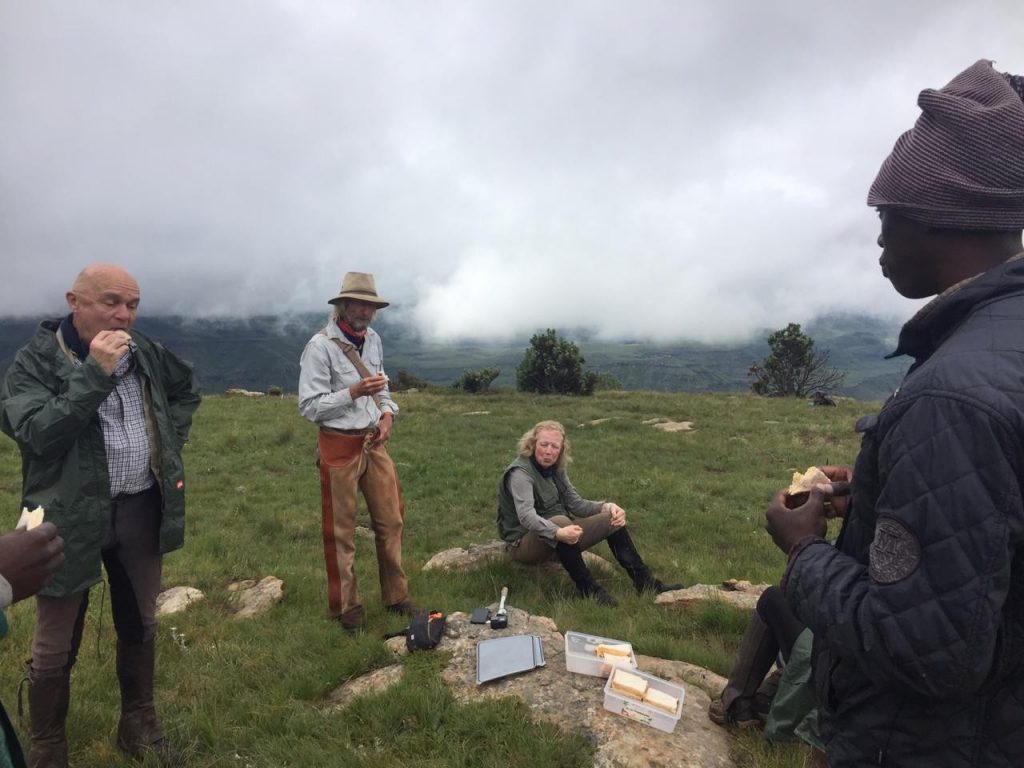 The next day we were off to next accommodation The Project. Alexis cooks bread every morning, so warm bread along with sausages and roasted tomatoes, porridge were on offer at breakfast this morning. That days route took us over another 3000m pass, but lots of wide open spaces so the pace was much quicker. A narrow path with a steep drop off to one side….. as I said before, just trust your horse which led down to a lovely waterfall where had lunch – swimming was an option, but only one hardy soul today. Then on The Project, arriving at speed! This was built by Americans, big rooms, kitchen area, lights, showers toilets, but no electricity or water. The latter has to come from the river and you fill the toilet chamber to flush, Alexis and Jason boil more water for bucket showers (perfectly adequate), and lamp for lighting. Strangely it has a certain charm about it even though basic 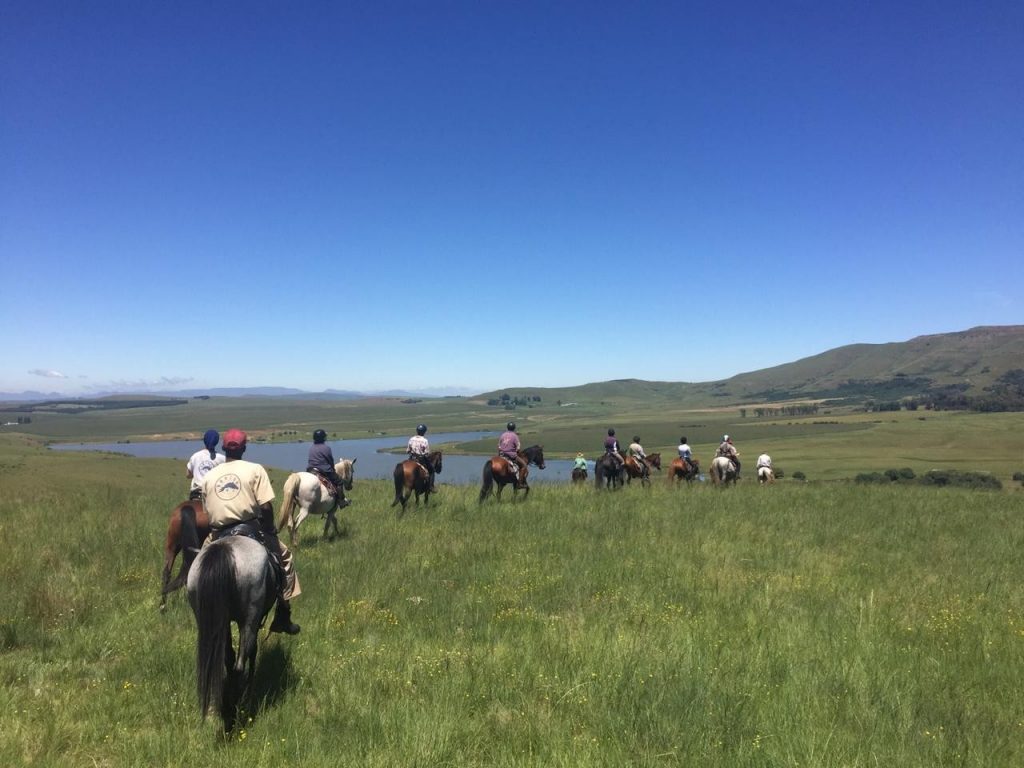 The next day another circular trip, wide open spaces, lunch by a river, back through the villages where we met Alexis, Jason and one of the guests who wasn’t riding today to go the local shop which sold the traditional balaclavas, the shop owner had a good trade that day, onto to 2nd shop, Chinese where could buy all and everything, onto to the pub for a drink, then back to the Project, last bit at high speed again. Fresh banana bread on offer for today’s snack, a quick swim in river to cool off where we had an audience of local children.

Some down time before settling down to the evening dinner of roast chicken, mashed potatoes with carrot through it, broccoli and green beans, couscous feta beetroot and squash salad. The man’s a genius!

And on to St Bernard’s Peak. Off we set and about an hour in met Steve. Steve likes to run, he had left St Bernard’s at 5am, and we met him about 9.30, when he turned round and ran/walked with us back again. The landscape remained the same, following rivers, up onto high plateau where we crossed into S. Africa, a broken down barb wire fence with 2 posts but no gate. Here we had to walk quite a distance because the hillside was grass and very steep. Back onto the horses and we eventually got down, found a dirt road off which was the hotel, an oasis of calm and comfort. There’s a large swimming pool, individual rondavels, I had one to myself, even crazy golf……! That evening we had drinks in the bar and deleidiocs food in restaurant, life is good! 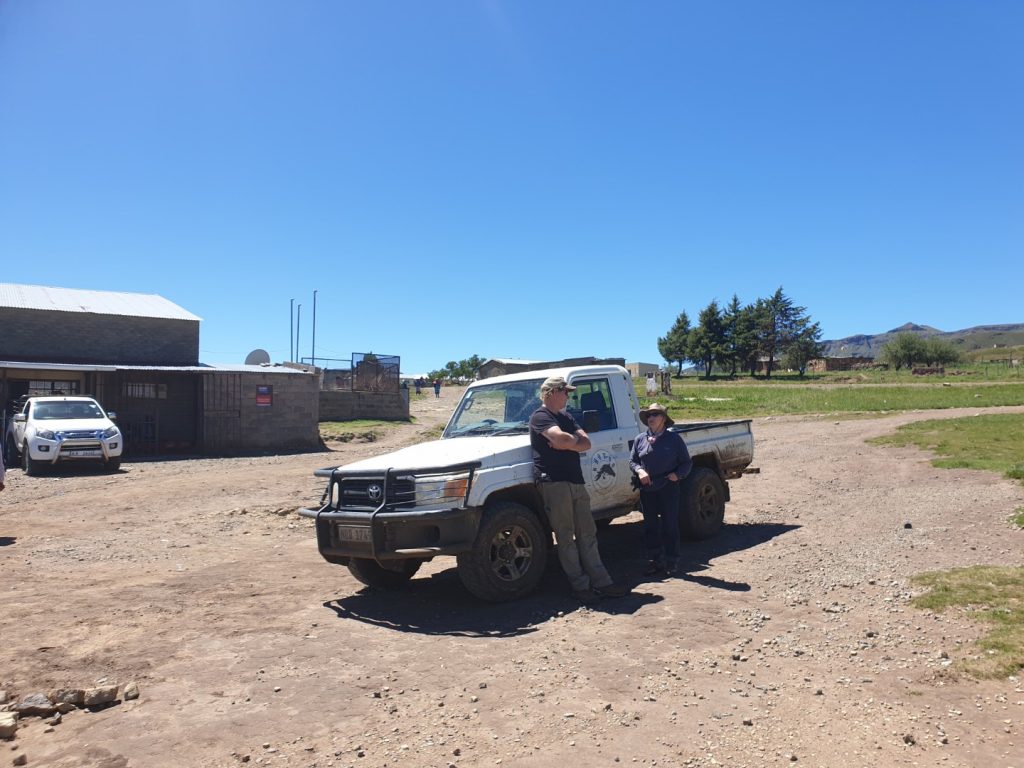 The next day it was a short round trip with Ian, the owner of St Bernard’s Peak and his wife, plus Steve running with us as well, it was quite the group and mainly a day to unwind and enjoy being where we were, as the last day came all too soon with a 40km back to the border post. 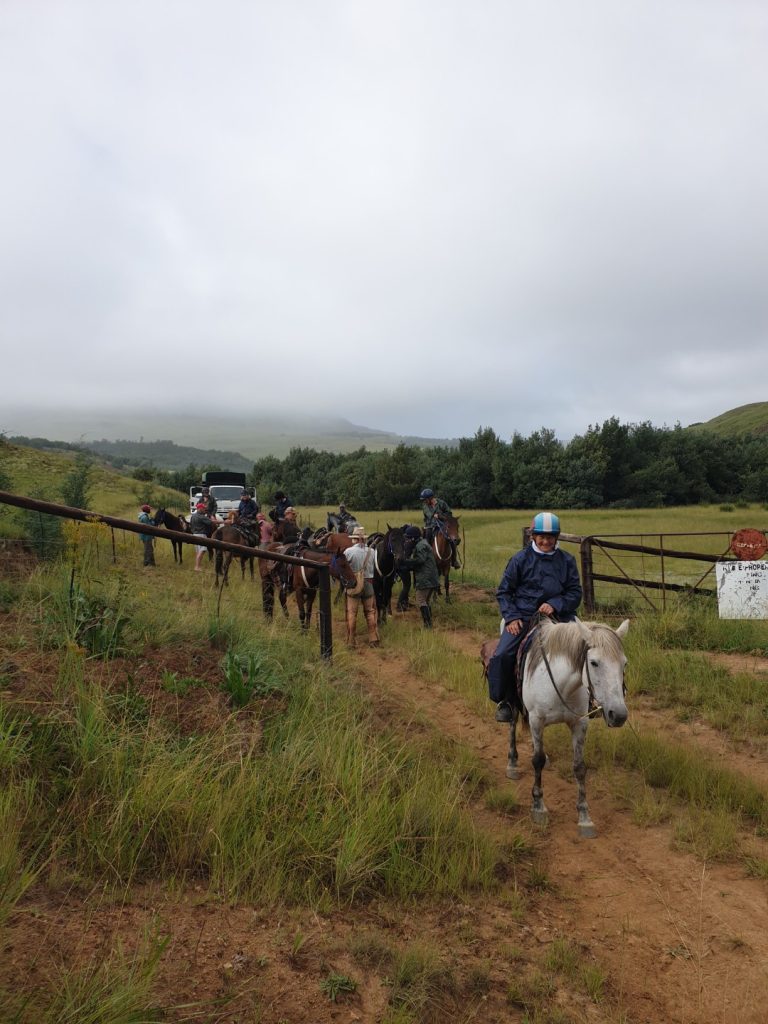 On our last day riding the weather had turned, it was misty, windy with light rain and we had to go high again. At first pleasant canters through woods, Steve riding with us this time, before we started to climb. Apparently we were on a ridge and we could see where it dropped off either side, just not how far, which may have been a blessing. Certainly needed the rain gear as the wind whipped through the mist and us. Came out on high upland, the horses knew they were heading home and found another gear as we cantered until we came to the spot of our first lunch spot. It only remained to descend the last bit down until we were sadly back at the border. A quick goodbye to our bold, trusted horses as they waited for their transport back to Khotso and a well deserved few days rest. And a massage was available for any that wanted it back at Khotso, what a perfect end to a perfect holiday. 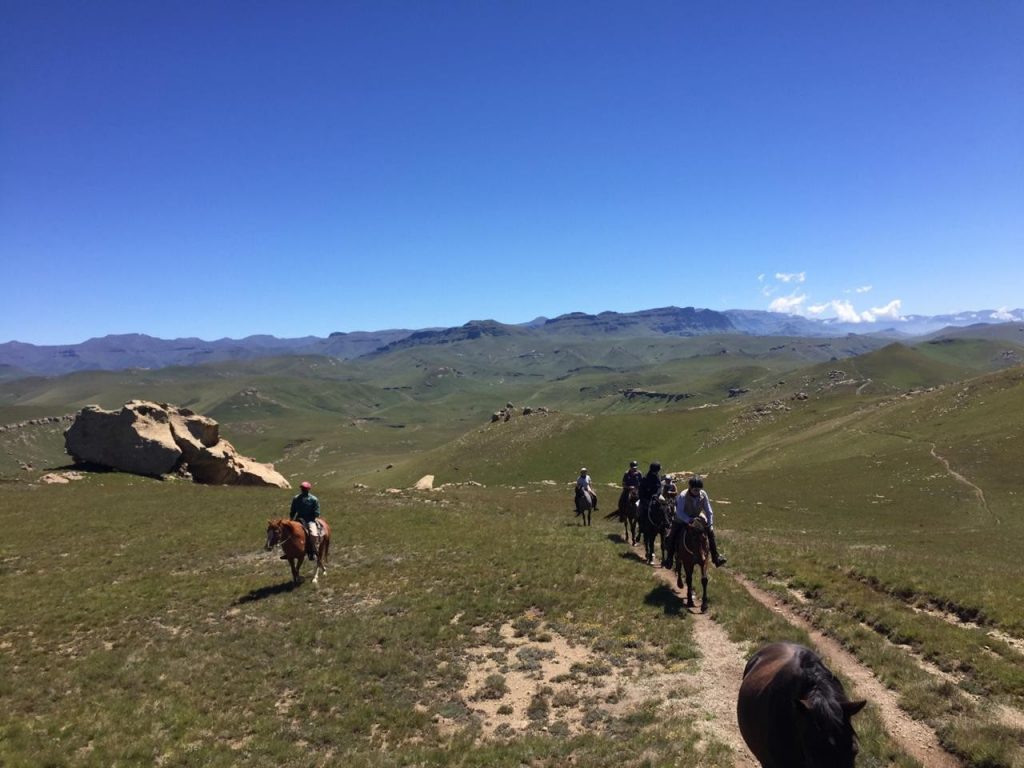 This ride – why? It gives an experience of being far removed from our normal lives and it pushes you a bit. I remember someone saying, ‘I can stop being scared now’ as we came down a tricky bit and immediately had to change her mind as we came to another bit. But, and it’s an important But, I never felt that it was too much, it was still a lot of fun. I’ve enjoyed most of the rides I’ve been on, in many countries but it’s rare for me to want to go back, there’s so many other places to go. I do want to return to Khotso, probably at a different time of the year as I think it would be very different and that probably says it all for me. 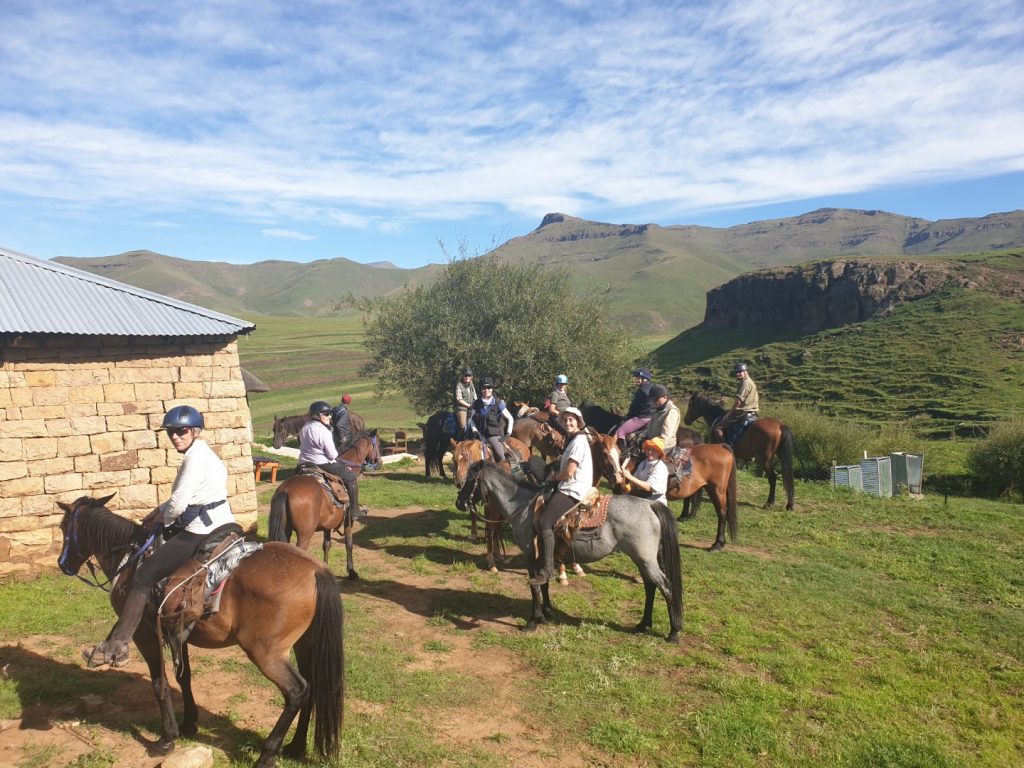