We GUARANTEE you won't find the same horse riding holiday at a lower price through any other source... and if you do, we promise to refund the difference! 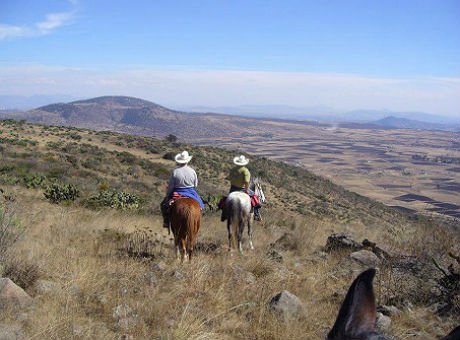 Rancho Las Cascadas is a fabulous cultural experience in Mexico with wonderful riding country and stylish accommmodation. As part of our Horse Riding Holidays Mexico collection…

A horse riding holiday in Mexico will take you into the original cowboy country – although the Mexicans themselves might disagree. They prefer to call themselves cowmen.

The difference comes from the word vaquero, used to describe the rugged horsemen who have been herding cattle across the Mexican plains since the Spanish arrived in the country in the 16th century. Vaquero is a combination of the Spanish word for cow and an old Spanish word for man, meaning that every vaquero who ever rode was literally a cowman – it was only when the cattle trade began to grow across the border in the USA in the 19th century that the term cowboy began to be used instead, for reasons that are now lost in time.

Being a vaquero is still a badge of pride for many Mexicans today, and a horse riding holiday in Mexico, where you will encounter them along the way, will show you why.

Our luxury base at the boutique Rancho Las Cascadas will see you live a lifestyle more in keeping with a caballero than a vaquero during your horse riding holiday in Mexico, though – with the caballeros being the landed gentry who employ vaqueros to look after their cattle.

They typically live in large haciendas with all manner of comforts and ease, and that’s exactly what’s on offer at the Rancho Las Cascadas – one of our favourite places to stay. Accommodation there is pristine and service is five star, so you really couldn’t ask for any better during your horse riding holiday in Mexico.

Rides at Rancho Las Casacadas are tailored to your individual requirements and each day is different, while it also offers day trips to the Teotihuacon Pyramids, Mexico City, and the old colonial town of San Miguel.

Zara and I have personally vetted all our horse riding holidays in Mexico and so we can guarantee they are all of the standard of both comfort and enjoyment you would expect. But don’t just take our word for it – go and see for yourself!