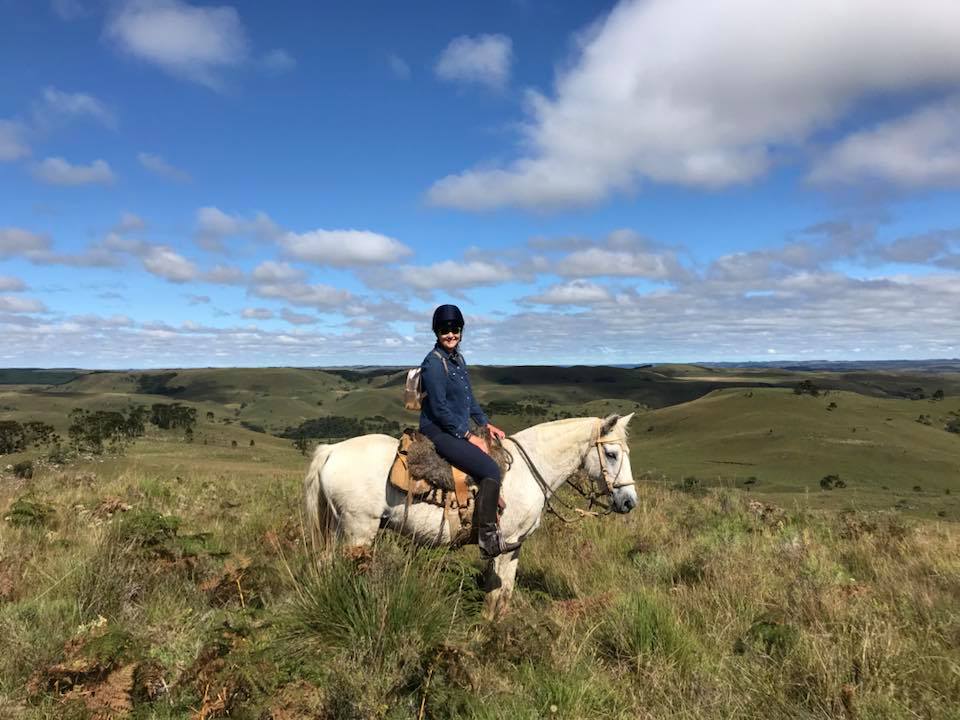 I rode with the outstanding guide Paul Coudenys in Colombia in May 2018, I was struck by this beautiful South American country and by our new, super-efficient partner Paul and when he said I should join him on horseback and visit his home country of Brazil, it was an easy ‘YES’.

He lives in the southern state of Santa Catarina, where he told me we could ride with the gauchos and ride from fazenda to fazenda (farm to farm), seeing nothing but cattle and wide-open countryside for miles and miles. This sounded like heaven, but he also said that I should add on some nights in the biggest wetland area in the world, called the Pantanal to the West of the country. I was intrigued, a huge wetland area, what would the horses be like….? I quickly learned they farm cattle here and for that reason we would have a huge selection of mounts to ride through the wetlands and spot some incredible wildlife along the way. That was it – together we set about preparing and working out an itinerary where we could visit both areas and we called it the ‘Best of Brazil’

As the years have gone by, many of my clients have become friends and fellow explorers keen to visit new places and ride, with this in mind, I started to ask those that I thought had a sense of adventure and could adapt (should we run into unforeseen problems along the way!) to join me – before long, I had a fantastic mix of like-minded riders as keen as I was to embark on our Brazilian riding adventure. 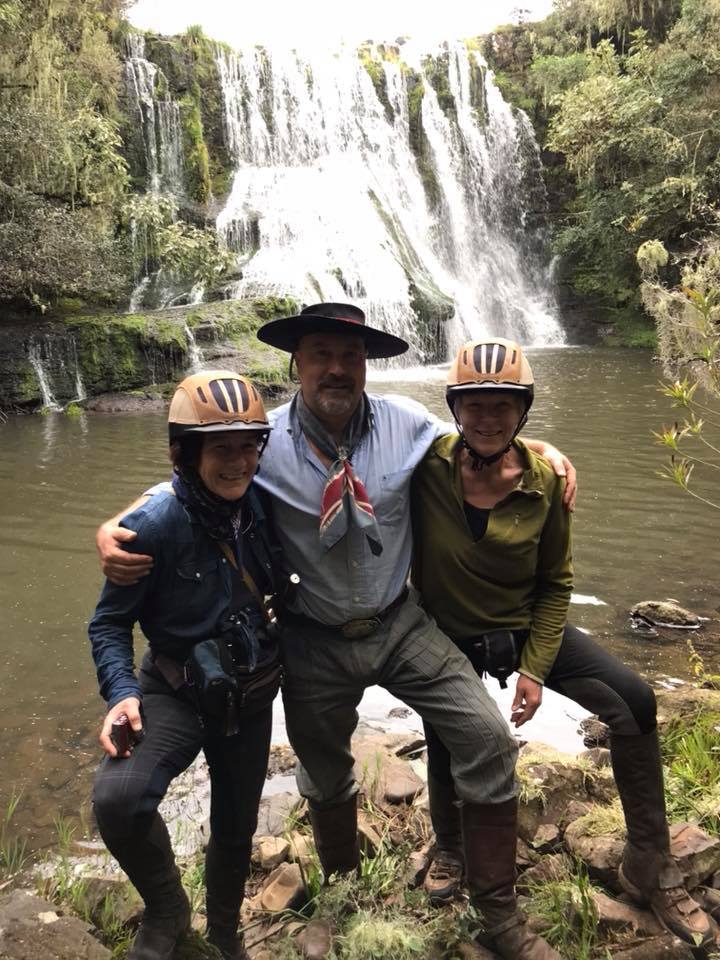 I’d love to take you through the whole trip, but that would just take too much time, so for now I will set about giving you a flavour and tell you all about the highlights!

We flew down from Sao Paulo to Florianopolis, a beach island in the South, worth a stop off for a few nights if you have time to enjoy beach life! This was the meeting point for all of us, some flying in from Canada, USA, UK and Cyprus…….! Into our van and off on a 4 hour drive into cattle country, on the way we stopped at a great saddlers and some of us picked up our gaucho boots, trousers and berets! Always fun to look like the locals!! 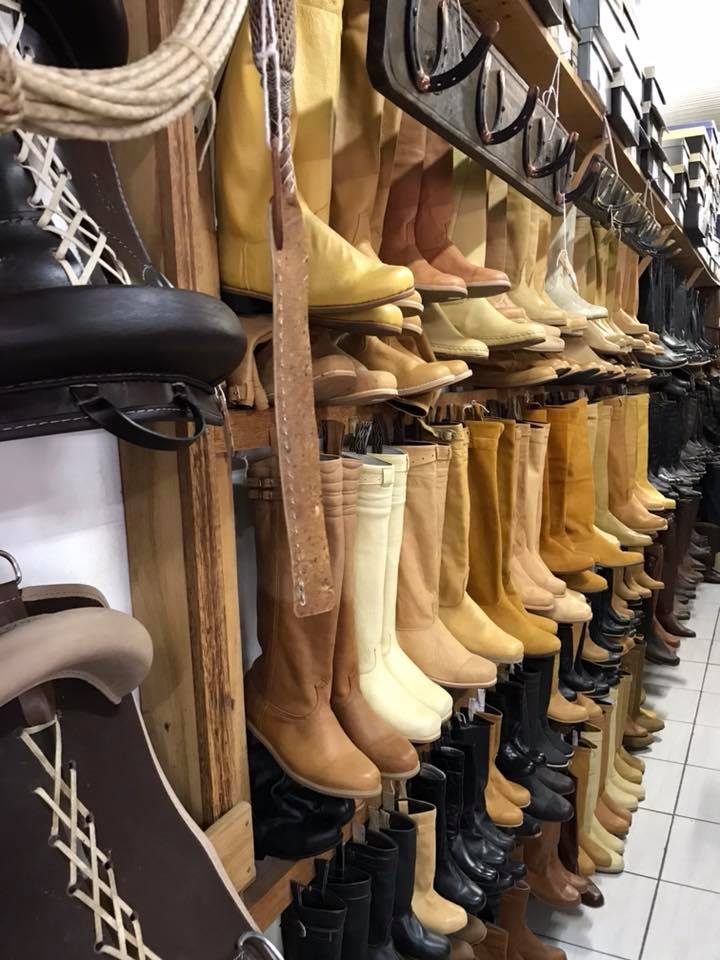 It was certainly worth the drive, we came off the main road and 20 minutes later down a rough track we were at Daniels fazenda – wow, what a place, busy with gauchos and family, horses and a barn, fitted out with rustic rooms where we were to stay the 1st and last nights. Downstairs in the barn there were long tables, space to sit, fires, even a stage and all with gaucho kit adorning the walls – all this just sat up on a level from the horse’s barn, we were already so close and in tune with our equestrian friends, how cool!

We got such a great welcome, warm handshakes and a cold glass of the local Caipirinha! This is the delicious drink of choice made with Cachaca, lime, brown sugar and lime – we had it every day and eased all our riding pains away!

The next morning, a great breakfast, mix of hot and cold dishes, eggs, bread, hams, jams and Brazilian coffee, before heading out of the barn to meet our mounts. The horses were a good mix and there were lots to choose from, good, sensible forward going mostly Criolla types. Most of us were happy with our horses, although we did make a few changes along the way, but this was no problem, anyone wanted a change, there was always fresh horses on hand and one only had to ask!

And off we went, being told by our trusty gaucho guides, that this was now our country and we could ride where and as fast as we wanted. No need to stay in lines just follow our guide in some shape or fashion and enjoy the ride and boy what rides they were – the openness of the land was vast, it just kept giving, in places you thought you were in the Lake District or Scotland, but with no end. In the evenings, we arrived to our next fazenda, greeted with the same enthusiasm as we had been at Daniels, with stop offs at other ones for lunch. With nothing in between except cattle and land, it felt remote and wild. Evenings were a highlight, served the best of steaks cooked on open fires, beers, red wine and more Caipirinha’s, often local musicians would visit to play and we would sing and dance the nights away with our new gaucho friends! 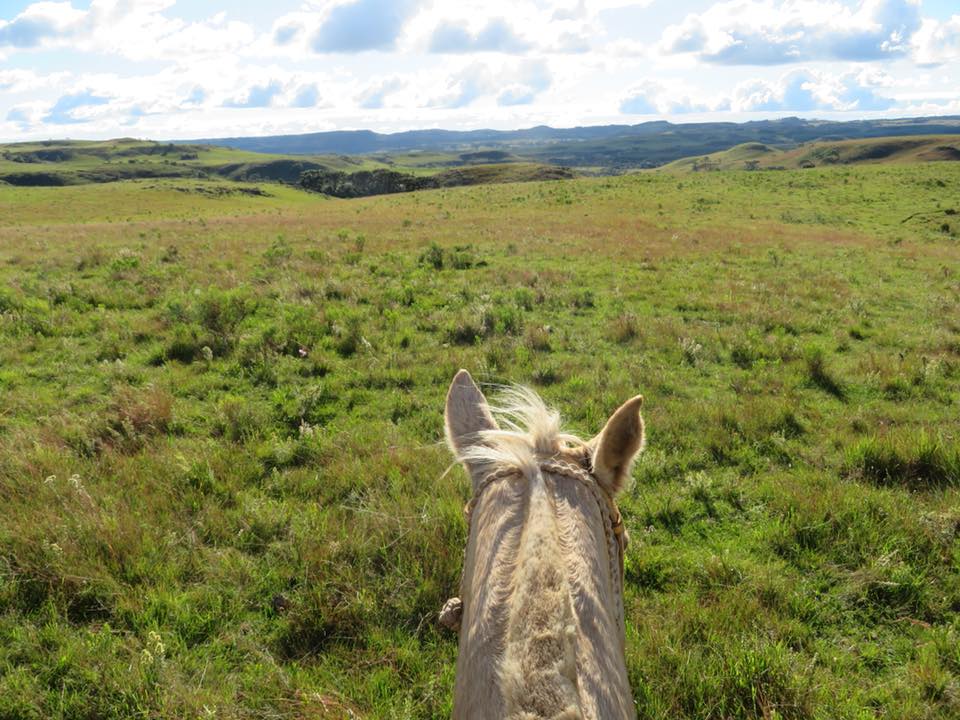 And before we knew it, we were back at Daniels, slightly weary with all the late nights, packing for our next adventure to the Pantanal, where the pace would slow and we would become at one with nature.

We flew out of Florianopolis and into Campo Grande, another surprise of a place, sadly we got there late and didn’t have time to explore, it seemed like a happening town – it is dripping with money, this is where the cattle sales happen and buyers fly in by helicopter, kind of felt like Dallas, Brazilian style…………………………..!

After a quick overnight stop in a good hotel we flew out early morning from Campo Grande airport, in our little 5 seater Cessna planes, 3 of them for our group, now this was muchos fun, some of the group turned a bit green about the gills and I have to say for a moment, I wondered if I had laboured this point of the itinerary enough to make sure everyone was on board – too late now, everyone, jumped in, strapped up and I have to say was one of the coolest flights to date, in line perhaps with flying into the Okavango Delta in Botswana (another wetland area, teeming with game, but on a smaller scale to the Pantanal). It was an hour flight and we watched as the land turned from farmland over some mountains, into a basin, where the Pantanal wetlands began, as we flew deeper and deeper into the area, more pools of water appeared and we could follow the trail of the River Negre. And before we knew it we landed, on a strip of grass, right next to our lodge, where we would stay with our host, another Daniel and his family for another 4 nights. 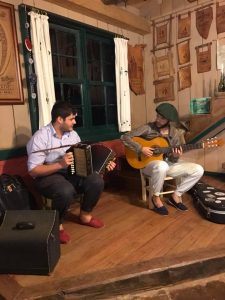 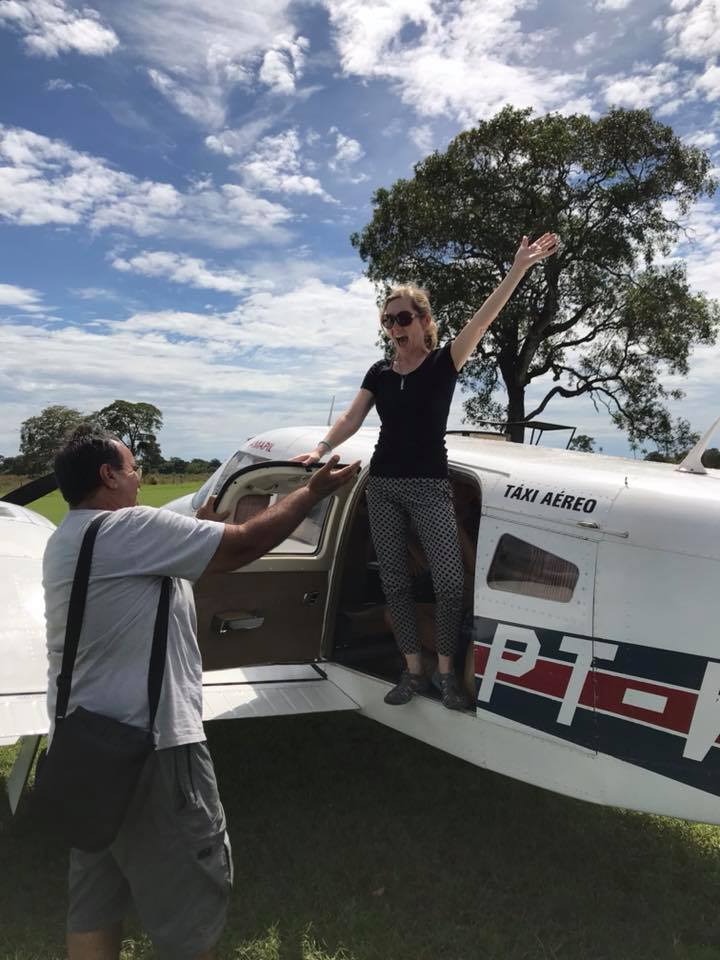 Originally, we had been set to ride to different locations, BUT due to unforeseen high levels of water, we had to remain at the lodge on this occasion – with so much to see and do each day, it wasn’t missed and actually after the pace of riding and moving with the gauchos, we were actually ready for the break.

The lodge is simple, clean, welcoming and in an awesome position, right on the river, so easy for us to hop on some boats one afternoon to fish for piranha! And at the heart of the Pantanal, so we could ride out on any direction with our Pataneiro cowboys riding right up to our knees through the wetlands, seeing some incredible wildlife along the way – nothing can prepare you for seeing either the large or small Anteater, strange creatures in the way they move and how they look, part mammal at the front, but like a bird with feathers at the back! There were always Cayman slipping in and out of the water, our mounts unbothered by their existence, seems they are after the small fry fish not horse flesh and then the cutest of cute, Capybara’s, huge rodents which had babies running around with them which you just wanted to scoop up and cuddle – and funniest I thought of all, the burrowing owl, little things with bug eyes, that popped out from the ground! 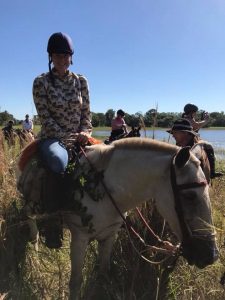 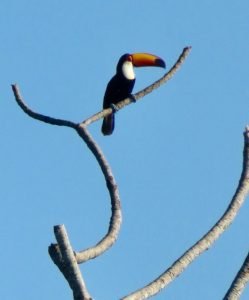 The birdlife here is like nowhere else, we saw everything, highlights for me being the Tucon and so many beautifully coloured Macaws, it really did feel like we were in Brazil!

And our horses, really surprised us, thought they might be a bit rough, but of course they are working horses, used by their cowboy hands to work the cattle I should have expected more, they were forward going, light in the hand, well behaved and in good condition – most were greys, as this is the local Pataneiro breed, they all run unshod as you can imagine and their hind quarters were all like showjumpers, so strong on account of all the work they do in water. 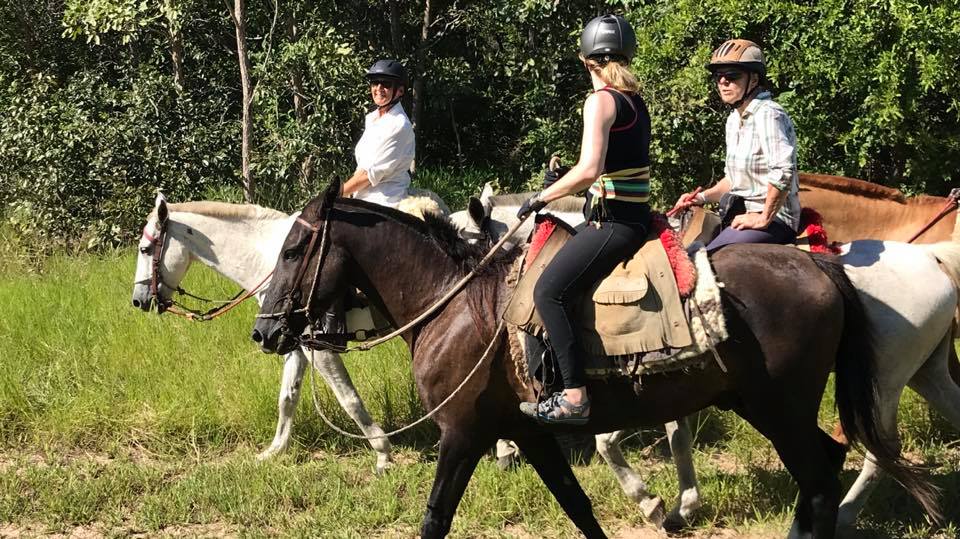 I was really surprised by the food here too, really varied, well cooked and fresh, given that sometimes the only way in and out was by plane, they planned well and had their own vegetable garden.

And so we came to the end…………………… we had galloped freely with our gaucho friends through the rolling landscapes of Santa Catarina and flown into the very little travelled, tropical wetlands of the Pantanal, to ride with our Pataneiro cowboys spotting immense amounts of wildlife on our way – two very distinct regions, both immersed in a horsey culture I didn’t really know existed. Once again I felt privileged to be able to ride in such culturally diverse areas of the world, enjoying the company of locals who are as passionate as we are about their equine friends and getting to places very few ever have the opportunity to travel.

I’d urge anyone who is looking for a diverse riding adventure to follow in our foot step and join the next ‘Best of Brazil’ ride with Paul. The next date planned is the 1 – 11 May 2019. Equally if you don’t have that much time, you can visit each place individually and Paul runs rides there through- out the year on set departures, please see www.zarasplanet.com for details.