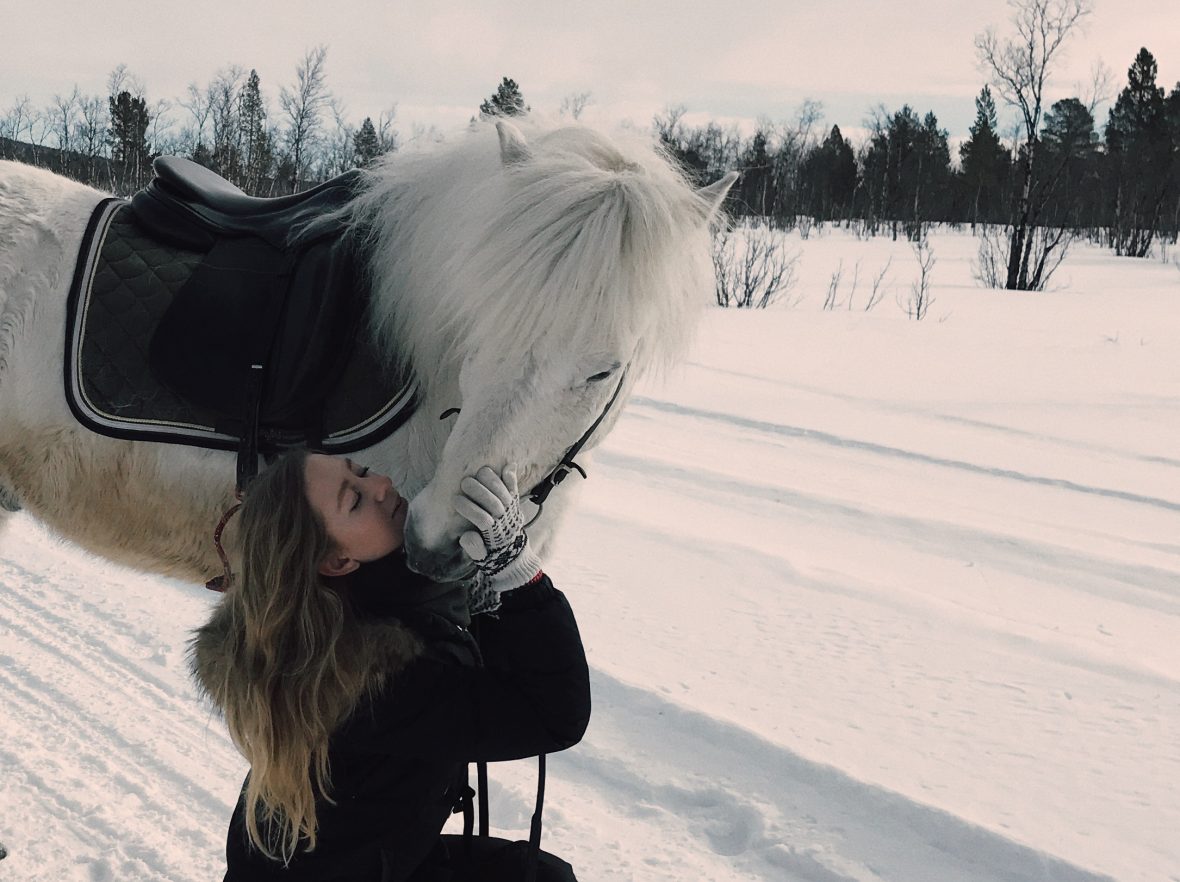 I was a bit reluctant to leave sunny Paris behind and swap plus 20° to minus 10° in Lapland, but the taxi was waiting and I was eager to discover the Great North. During my comfortable SAS flight to Kiruna, the people in the next seats kept telling how rare it is to catch the Northern Lights and they were wondering if their 3 nights would be enough this time to get a glimpse of such a rare sight.It was their third time to Lapland, hunting the Auroras and they had had no luck the previous winters. We landed on the snowy field and the pilot wished us,“Bonne Chancewith the Aurora Borealis”, emphasizing once again how rare it is to catch them on a short trip. I decided to keep my hopes up, no matter what.

Sarah met me at the beautiful red airport of Kiruna, the northernmost airport of Sweden, and off we went, ready for our adventure. Of course, my main aim was to ride with beautiful Icelandic horses and discover the vast nature of Swedish Lapland, but I was still hoping to get a glimpse of the Northern Lights.

We had been driving for 10 minutes when I saw it. The first flash of green light struck the sky, dancing around the road. Then another one. The green particles were waltzing in the sky, creating intricate forms and fading into blue or pink shades. Magic! 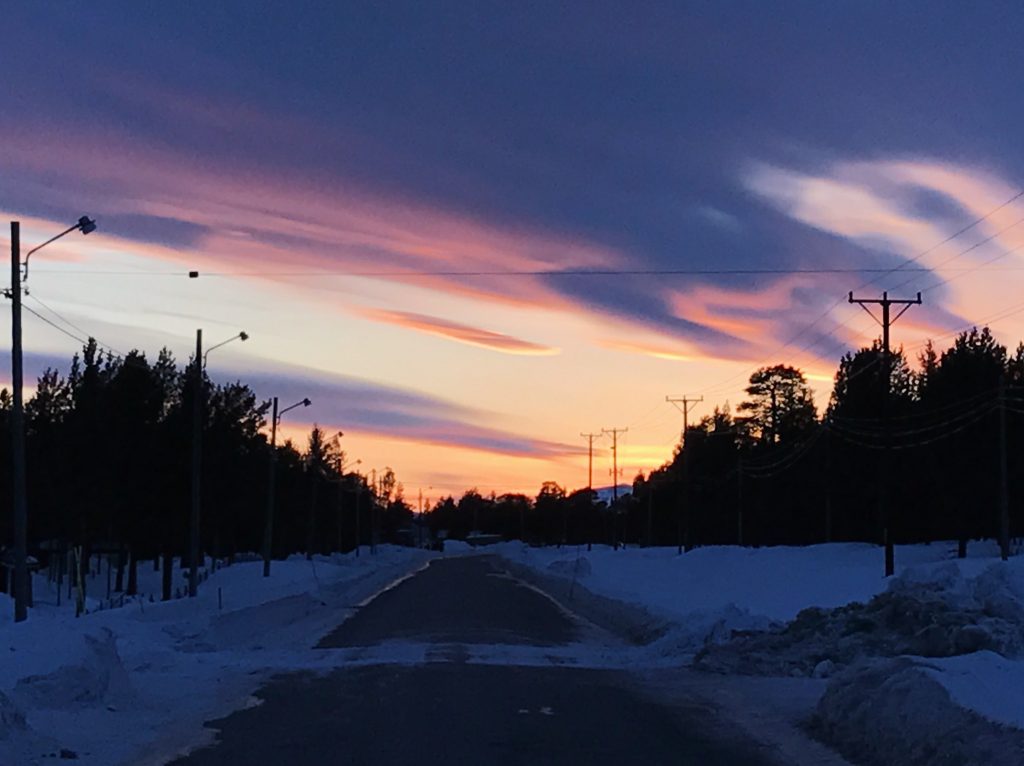 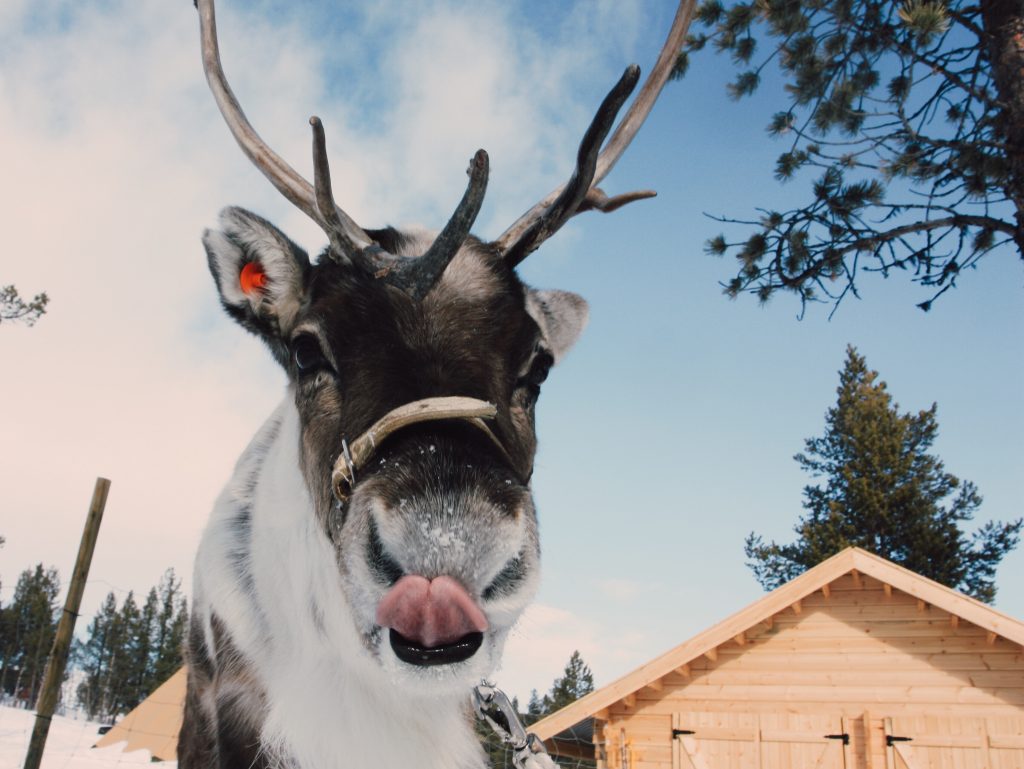 Sometimes we could even see heart shapes or animal figures appearing and it looked like the whole sky had turned into a talented cappuccino art cup competition…Even Sarah told me that this Auroras was spectacular and she has been living in Kiruna for two years. What a start to our Lapland adventure!

The next morning, I was extremely excited to meet the horses. My companion for the day would be Kapteinn, a very handsome Icelandic gelding. It was love at first sight. Kapteinn was willing, easy on the mouth and such a good teacher! He is definitely not a beginner’s horse and I felt that during my booked “tolt” lesson, (I did love the challenge though). If the rider does everything right, Kapteinn goes into a beautiful tolt and changes gaits perfectly, however if you hesitate one second, he starts playing with you. I had so much fun during our ride getting to know this wonderful creature! We galloped and tolted in the pristine snow that shined like millions of tiny diamonds. Amazing!

When both the riders and the horses were tired of galloping, we made a stop under the magnificent pine trees. The horses got their oats first, as soon as we had liberated them from their saddles. Kapteinn munched happily, grunting from pleasure. The dog got its treats and then tried to steal some of the raw meat from the bags. Then, it was our turn to have lunch. Sarah started collecting wood for the fire and everything seemed much better in the warmth of the flames. We enjoyed our feast of fried reindeer meat and cookies for dessert, sitting on the saddle bags in the snow. Such a simple and tasty lunch! It felt like proper camping. 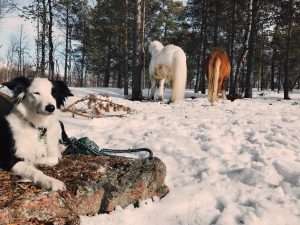 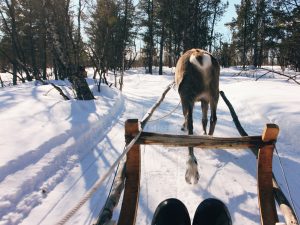 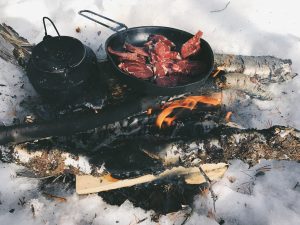 During this winter adventure, there were many other activities to choose from: skiing, snowmobiling, a sauna experience, dog and reindeer sledging and a trip to the icehotel.

I had only 3 full days and wanted to ride as much as I could, as the Icelandic horses were my priority. Luckily, I had Kapteinn every day. Since returning, I so miss him. We went riding in the forest and had lessons with Kerstin.However, I also managed to go reindeer sledging and crammed a visit to the ice hotel for a proper “ice experience”.

Reindeer sledging was magical. We fed the reindeers, had a proper Formula 1 reindeer sledging tour and learned about the Sami culture. Sami are the people who traditionally work with reindeers in Lapland. From generation to generation they pass on their reindeer mark (special ear cut to mark the reindeers belonging to each family). This mark should be unique and easily identifiable, so that when people round up the animals in spring, they can easily pick out their own reindeers. It was such a humbling experience, learning about their ancient culture, in a tipi around the fire with a Sami host, while sitting on reindeer skins munching a traditional Sami meal.

My trip to the ice hotel was completely different. We visited luxurious art suites where everything was carved out of ice. Also, we had a quick trip to the ice bar, where we had drinks from ice glasses followed by a traditional Swedish dinner in a restaurant. I really enjoyed the cloudberry dessert with vanilla ice-cream, which I will try to make back home. All I have to do is find some cloudberries in the Vincennes forest. 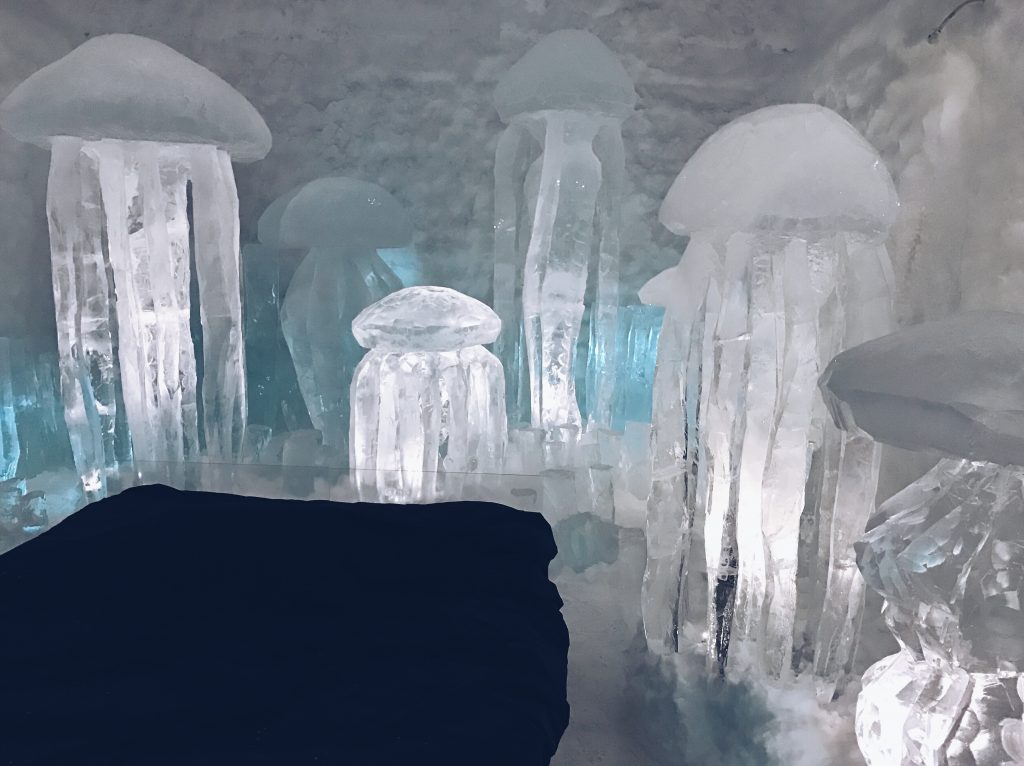 Now in France again, all I can think of is going back to Lapland this summer. Apparently, Kerstin has a weeklong mountain tour with the horses. I do hope that Kapteinn would like to go with me again!

Season: end of March-beginning of April

Accommodation: simple rooms with shared bathrooms. Very warm and cosy houses (need to pay extra if you do not want to share a room)

Food: Every meal is delicious and home-made.

Host: Kerstin is an amazing host, trying to make each and every guest happy and to find a perfect horse for any level of riding. If you have never ridden before, this is your chance!

Highlight of the trip: having lunch or dinner around the fire, chatting and laughing about the day adventures.